Our mission as student leaders at California State University Long Beach is to provide cadets the necessary skills and leadership training to become officers in the United States Army, Army Reserve or Army National Guard, to develop the future officer leadership of the U.S. Army, and to motivate young people to become better citizens.

Army ROTC (Reserve Officers’ Training Corps) is one of the best leadership courses in the country. It is an Army leadership and field training program that runs during your normal school schedule. It trains you how to lead and conduct missions as a future officer in the Army. When you graduate, you will earn your commission and gold bar of a Second Lieutenant. It is the best way to get a feel for the Army and still lead a normal college life.

Bravo Company is comprised of Cadets that come from varying backgrounds but come together to train in order become future leaders of the United States Army. Bravo Company works as a cohesive team, exhibits camaraderie, and acts as a professional organization. While they are CSULB students, their qualities as a leader that they learn in ROTC are demonstrated in their everyday life activities and distinguishes them from the rest of their peers. 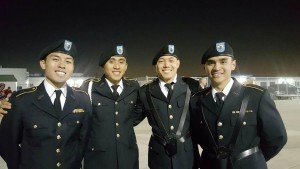 Need a Color Guard or Honor Guard ceremony? Honor the National Anthem and the American and State Flag by having CSULB Cadets render honors in full military dress uniform. We conduct ceremonies for all types of events, from school functions, ceremonies, sporting events, to honoring a guest speaker.

Cadets have Summer Training Opportunities to go on fully covered trips (room, board, and food) by the U.S. Army in order to train in real Army environments with real Army units. These training opportunities are not only domestic, but also located all over the world.

These Summer Training Opportunities range from training with the U.S. Special Forces (Robin Sage summer training), to learning how to jump out and parachute out of U.S. airplanes (Airborne School). Find out how you can take advantage of these summer training opportunities.

Need a Color Guard or Honor Guard ceremony? Honor the National Anthem and the American and State Flag by having CSULB Cadets render honors in full military dress uniform. We conduct ceremonies for all types of events, from Greek life functions, sporting events, to honoring a guest speaker.